These three dimensional hyperrealistic sculptures of sea creatures by Keng Lye are mind-blowing. The Singapore-based artist uses acrylics and epoxy resin to render these incredible works of art by first pouring resin into a receptacle, then meticulously painting a layer of acrylic over it, and adding another layer of resin, building up layer after layer until the forms emerge. Much like the process of how a 3-D printer functions, each slice reveals more about the animals he creates, creating this amazing illusion of structural depth.

So are they paintings or are they sculptures, one asks. I guess they could be classified as both. The technique was originally used by a Japanese artist named Riusuke Fukahori, who focuses his creative energies on three dimensional goldfish. In his series “Alive Without Breath”, Lye takes the process an extra step by having the creatures emerge from the surface, creating a greater sense of dynamic perspective. To achieve this, he adds physical pieces that he paints to match the layers below.

“I started my first series in 2012 where all the illustrations were “flat” and depth was created using the layering of resin and acrylic over the different parts of the illustration. This year, I started on the octopus and it was purely an experiment; I just wanted to see whether I could push this technique to a higher level. After applying acrylic paint straight onto the resin, I incorporated a 3-D element in this instance, it was a small pebble for the ranchu and octopus. For the turtle, I used an egg shell for the turtle shell and acrylic paint for the rest of the finishing. The whole idea here was to give the art work an even more 3D effect therefore you can have a better view from any angle. I think there are still many other techniques to explore.”

To check out more of his work, visit his gallery. 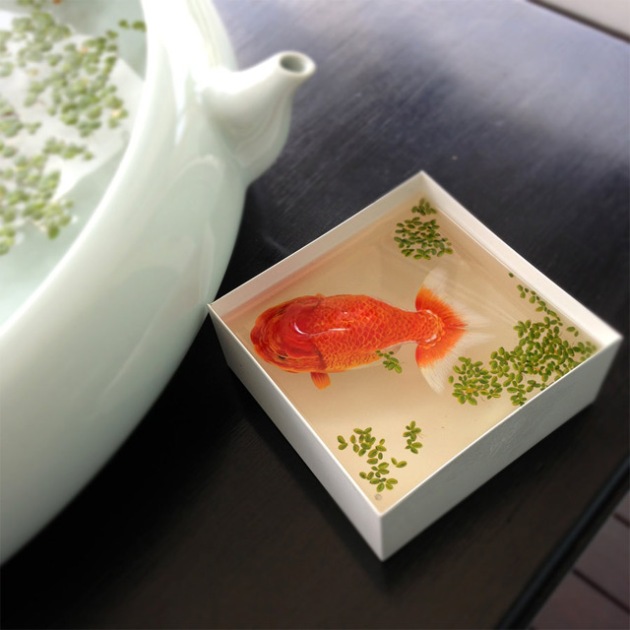