In the aftermath of the Libyan uprising against the tyrannical Muammar Gaddafi, the people have just cause to celebrate, though their future is still very uncertain. Having a chance at a new found freedom,  a more democratic and liberated Libya is beginning to surface and it’s been inspiring many towards creative projects of all kinds. Sculptor Ali Al-Wakwak is using the weapons and debris from military vehicles that brought so much death to his country and transforming them into works of art. Having amassed material for his work during the revolution, he constructs animals, birds and dinosaurs from the broken bits, twisted and tarnished by war. The dinosaurs are a metaphor for the Gaddafi regime that is the dark and evil side of Libyan history – something that once was vicious and powerful, now rendered extinct. A hope that others will overcome their own predatory foes. 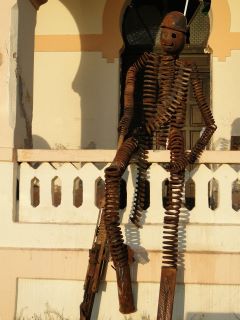 According to Mashalla News, Al-Wakwak still lives with the haunting memories of life under the Gaddafi regime. He spent seven years in prison in a tiny cell with seven or eight other people with not one possession amongst them, just for his refusal to fight in the war in Chad. Luckily, he escaped torture, but others were not so lucky. His son has also spent seven years in prison, and was tortured due to the fact that he was a devoted religious believer, and was seen praying a lot. Gaddafi feared these types of people the most and doled out severe punishment. Al-Wakwak and his son were reunited once the revolution began, and creativity sprang from the ashes.

Al-Wakwak’s work is mostly about the idea of change – the transformation of something old to something new. The past must be remembered, no matter how harsh, how ugly and broken, but it must be a in intrinsic part of something changing. A phoenix-like evolution must take place. His sculptures often bring people together in order to piece them together, as many as ten people collaborate to assemble their parts, further evoking the creative aspect within others in the process. In time, we will begin to see a new hope in the progress of Libya – this is just the beginning.